Quaranteen I: The College Admissions Article

A few days ago, I submitted an article to my local newspaper, where I’m now remote-interning to accommodate social distancing guidelines. The article was meant to address how the college admissions process has changed in the past twenty years; it was directed mostly toward the parents of my fellow 2020 seniors. I thought it would be a good way to put into context just how much more competitive the process has become since our parents went through it a few decades ago. I hoped that with it, I could provide some perspective that families would find valuable, especially as the last of my classmates’ decisions rolled in last week.

It’s an idea that’d been kicking around in my head for a while, and I was excited to write the article. Unfortunately, I botched it. I wrote a strong introduction, but an irrelevant one-- it does a fine job of addressing the impact of the statewide shelter-in-place on my graduating class, but that's just not what the rest of the article is about. Even I get whiplash when I look back and read my transition to the main point of the article.

Just as the reader gets invested in the topic that's introduced (COVID's impact on the class of 2020), it’s revealed that the true subject of the article is college admissions, a topic only tangentially related to the introductory paragraph. In short, it's an article with two foci, and once the first falls out of focus, the article as a whole never recovers.

I can try to rationalize my decision to open with the effects of the virus on our senior class: COVID is such a solemn issue that it didn’t feel right to sit and complain about something as trivial as it being harder than it used to be to get into UCLA. I decided to check myself by addressing the global pandemic right off the bat, but it didn't work as planned. The introduction I wrote doesn’t read like an acknowledgement of a larger issue, it reads like an introductory paragraph-- thesis statement and all-- for a topic that I just didn’t write about.

Yes, solemnity is conveyed, but it's not appropraite-- I ought to have written just a sentence or two on COVID, and trusted the audience to contextualize my case for themselves. I can write a COVID-19 article (and I will!) later, but this was supposed to be about something else completely.

I was too self-conscious, too afraid of coming off as uninformed or insensitive about the big issue of the day. As a result, I hedged, and it shows. I can attribute this in part to the pervasive nature of the coronavirus story, but really, this is a problem I have in general: I hedge. I minimize my own issues and ideas, both in writing and to myself, out of sympathy for imaginary people who I think have more important perspective. In moderation, this is just a healthy dose of self-awareness, but sometimes I take it too far. I apply that same minimizing philosophy to other people's issues, and eventually nothing seems worthy or important. As seen here, it leads to bad writing at best, and an ironic lack of awareness at worst.

my emails are increasingly beginning to sound like "sorry to bother you during The Great Entroublement with what is ultimately the most minor of minor problems which i must now, unfortunately and with profuse apologies, make your problem as well, comrade"

I think this is good. I’m fleshing out a few of my bad writing and thinking habits while I'm writing for the Press Banner, so that I can course correct moving forward. I’ll be writing at least two more articles (hopefully more) before heading off to college, so with luck, my next one will be loads better.

Looks like I get a chance to fix my mistake before it goes to print. I am currently rewriting according to post above. 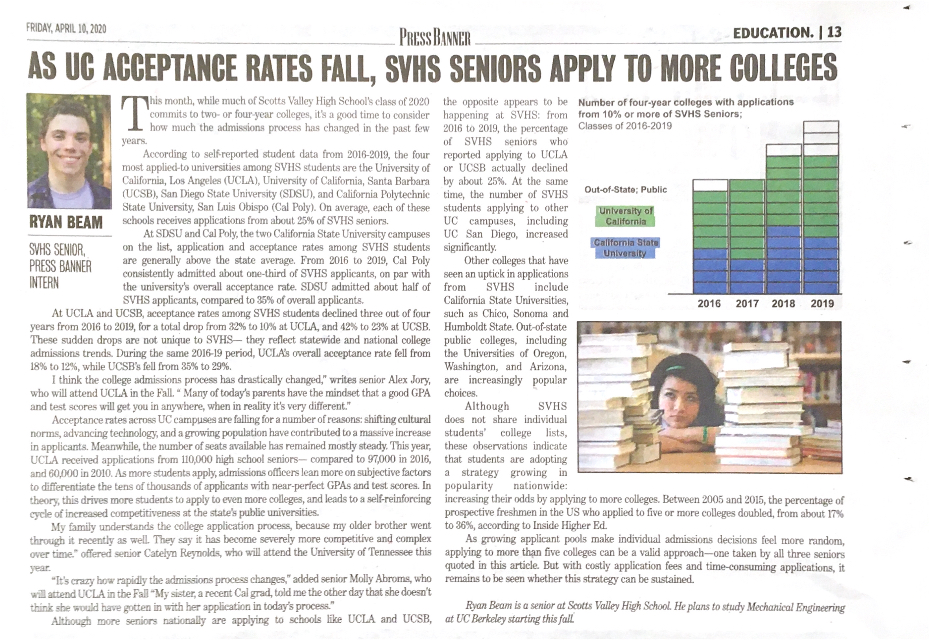 Well, as of this morning, my article is up and in print. I’ll be the first to say that it’s nothing too special. I still have some unavoidable (and at this point, uncorrectable) stylistic issues with what I wrote, and I wince every time I read a sentence that doesn’t flow well. I wish I’d written “as” instead of “while” in the opening line. I wish I’d kept more of the adverbs that I cut out at the last minute. And for some reason, there’s a missing quotation mark in the print edition that definitely wasn’t missing in my original submission-- that one, at least, I can chalk up to someone else’s error.

All that being said, I’m happy with the article. Writing it was an interesting exercise in journalism sans commentary, which I realize now is new to me. When I wrote for The Youth Journal, my articles often turned into impassioned arguments for or against something; when I wrote letters for my Assemblymember, I was almost always given someone else’s positions to justify; when I wrote my op-eds last year… well, obviously having something of an agenda is just part of the game when you’re writing an op-ed.

As a result, I came into this thinking that I had some experience, when in reality, I didn’t know the first thing about writing an objective journalistic piece. In my effort to compensate for that, I leaned too hard on statistics, I think-- making the article something of a dry, technical read. Maybe that’s okay, since I didn’t have room to flesh out the limitations of the shocking and negative trend that I meant to highlight. If I’d been more explicit, I might have alarmed readers unduly.

I realized a few things as I wrote this article; one was that I’m far more afraid of being either a poor writer or provocative when I personally know or am acquainted with the people who will read what I write. The feeling I have now is remarkably similar to what I felt after my Homecoming performance this year. I feel as if I’ve put myself out there in a risky way, and once again, although there is no negative feedback, the lack of pronounced positive feedback is enough to put a sinking feeling in my stomach.

I also hedged more than usual because I knew that whatever I wrote would almost definitely end up unaltered and in print. When I submitted my articles to the SacBee and LATimes, I assumed that they would probably never see the light of day. If they did, I knew, that would mean they had passed through a rigorous vetting process by people who literally vet articles for a living. It's nice to have that sort of seal of approval on your writing. In a sense, on a state or national level, getting published is more of an achievement than the public kudos that may follow; the opposite is true on a local level.

Next time, I think I’ll take a step back in the commentary direction, only because I’ve overcompensated with my most recent article: an article needs to have a thesis, and it ought to have a narrative. My lesson from the published draft is a sort of extension of my lesson from the unpublished one, detailed above: articles do not exist in isolation, and readers do not live in a vacuum. I need to trust the reader’s ability to infer things, to know things that I don’t tell them, and to recognize the difference between fact and opinion.

fun side note: I left my shelter-in-place for the first time in four weeks today so that I could get ahold of a print edition of this week's Press Banner